7 insights to prepare investors for the impact of the presidential election on real estate.

The 2020 presidential election campaign is a highly contentious affair. Doubtless, the results of the election will have a far-reaching impact on a number of sectors of the American economy. But what are the true implications for the housing market?

How will each candidate’s policies affect real estate? Whether you’re investing in real estate or just looking to buy or sell a house, here are some tips and insights to help you prepare and prosper, regardless of who wins.

1. Keep calm and carry on

Regardless of who wins on election day, real estate prices probably won’t see any drastic long-term changes. Historically speaking, the housing market performs consistently (and consistently well) under both Democrats and Republicans. Since 1979, the annual rate of property returns averaged between approximately 7 and 10 percent for both Democratic and Republican presidential administrations. In election years, home sales usually drop off from October to November more steeply than in non-election years (-15% vs -10%). This reflects buyer caution facing the uncertain outcome of a presidential election. However, the year following a presidential election is typically the strongest housing market year in every four-year election cycle, suggesting that the dropoff in November simply delays demand until the following year. 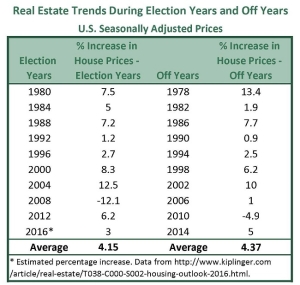 Our system ensures that presidents alone don’t make laws or control fiscal and monetary policy. This means the president’s impact on housing may be overrated. On the other hand, natural disasters, geopolitical events, and ongoing developments with COVID-19 are more likely to have an impact on property values and rent trends than election results. Exogenous shocks to the system can increase unemployment and force interest rate changes, which in turn disrupt financial and housing markets.

Election results in the 2020 cycle probably matter a bit more to real estate investors than to retail homebuyers. This is because the candidates have divergent policy prescriptions on several investor-oriented policy tools, including 1031 Exchanges and opportunity zones. 5. To the victor go the construction spoils

Red states have reported higher consumer confidence levels than blue states since the 2016 election. Likewise, single-family building permit growth was stronger over the same period in Trump-voting counties than in Clinton-voting ones, despite similar job and wage growth. It logically follows that a Biden win could benefit home building in blue counties, while a Trump re-election could continue propelling strong performance in red counties.

Over time, as presidential administrations roll out their spending priorities, different economic sectors respond in varying ways. The true consequences of the election on real estate markets will likely take a couple of years to materialize. Opportunities for investors and consumers to seize will present themselves based on what industries a president focuses on, and how well their administration works with Congress.

7. Weather the storm (and hope it passes quickly)

The biggest short-term risk to the housing market and the larger economy overall is a disputed election and protracted legal battle. Such a scenario would likely be accompanied by widespread civil unrest, which would spook stock markets, rattle consumer confidence, and in extreme scenarios cause massive property damage across the country. During the disputed 2000 election, the Dow Jones average fell 4% in the month between election day and the moment Al Gore conceded. It rebounded rapidly thereafter. How to Finance Your Property Investment

Whether you finance your property investment with cash or you need to turn to an outside source, it's important to know your options. When you want to invest in property, there are many steps along the way, from picking the right property to profiting from it—whether that means finding a